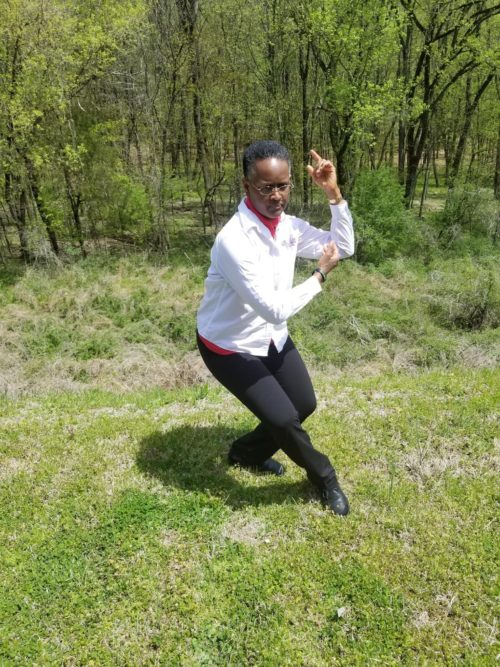 Practicing Tai Chi on the Greenway in Clarksville, TN

What is Tai Chi?

While sharing the 4 min Fitness opportunities, I often received the following question:  What is Tai Chi?  Tai Chi is a form of martial art.  There are several forms of this martial art that bear the name of the family that developed the means of protection.  For example, there is the Wu, Chen, Yang, and Hao form to name a few.  Each style has a series of distinct movements called forms that vary in length from short to long.  A short form may last a few minutes while a long form may last an hour.  The Yang style form is used in the 8-week Infinite Nine (9) moves in the Easy Tai Chi for Busy People program.

The martial art of Tai Chi Chuan (called Tai Chi for short) is also referred to as an Ancient Chinese energetic art that has a foundation built upon the belief of the intrinsic life energy known as qi. Qui means “spirit breath” or “life force”.

What Does “Tai Chi Chun” Mean in English?

Tai chi means “supreme ultimate” which in Chinese means “balance and harmony”.  Chuan literally means “fist or boxing”.  However, this term is understood to refer to a martial arts discipline or style.

What is the Origin of Tai Chi?

During the Yuan dynasty about 800 years ago, Zhang Sanfeng, a priest, went to the Wudang mountains located in central China to study the philosophy of yin and yang with the monks at the Wudang temple.  The yin and yang were believed to be the opposite forces that made up Tai chi, the “supreme ultimate”.  The belief was that the entire universe was a dance of opposite but balancing forces.  When these forces have balance, a state of harmony, longevity and inner peace expected.

While Zhang was in the midst of his meditation about these two forces, he was disturbed by a crane and a snake fighting.  He was fascinated by the demonstration of the elusive nature of the snake because of his coils and spiral an and the illusiveness of the crane by skillfully hopping from one leg to the other while skillfully peaking with her deadly beak.  Zhang saw the battle but also noted the fluid nature of the interplay of the animals that looked more like an eloquent dance.

Zhang’s epiphany caused him to realize that the philosophy of yin and yang was not simply a novel idea but a principle of nature that could be seen everywhere.  The straight lines of the crane’s beak were balanced by the circles and coils of the snake resulting in attacks being balanced by yielding or melting away.  Zhang concluded that if he could mimic this type of dance he could teach others and they could also learn the secrets of balance and harmony.

Zhang succeeded and developed a beautiful dance that was also a deadly martial art whose underlying premise was that softness will always overcome hardness, and harmonious mind and body will always win out over the chaotic mind and body.

Is Tai Chi a form of Yoga?

Many people assume that the origin of Tai Chi is similar to the origin of yoga or other meditative practices.   Tai Chi and yoga both have beneficial health value, emphasize the mind/body connection, utilize stretching, address body alignment, use breathing and deal with chi – energy.  However, there are many differences between these two exercise forms.  Tai Chi does not have a worship component to various gods and focuses on “flow” of breath and motion with less extreme stretching.  Tai Chi is a fully developed martial art while yoga is not.

What is the Relationship Between Qigong and Tai Chi?

Qigong or “energy exercises” is often practiced with Tai Chi.  After a great flood and a plague ravaged China 2,000 years ago, a great physician named Nua Tuo traveled to the affected countryside to see if he could determine the cause of the epidemic.  He observed that people are like water.  When freely flowing water is clean but when it becomes stagnant, it breeds pestilence.  The peasant farmers who sat around after their farms and fields were destroyed were similar to stagnant water.  They developed a disease.  Hau Tuo concluded that a lethargic body affected ones’ inner life source, an energy referred to in Chinese as qi, “the spirit breath”.  Hau Tuo also realized that none of the wild animals were sick.  As a result, Hau Tuo developed wu qin xi, “the frolic of the five animals”.  This workout mimicked the motions of the tiger, the deer, the bear, the monkey, and the crane.  This the first form of qigong.

For the next 2,000 year, up to today, tai chi and qigong have traditionally been studied side by side as the ultimate workout for the body, mind, and spirit.  From China to the world, many enjoy the health, exercise, and self-defense benefits of this practice.

Stay tuned for Part 2 when we will answer the question:  Why is Medical Direct Care Wellness Center Offering Tai Chi?

This site uses Akismet to reduce spam. Learn how your comment data is processed.